Kasson, MN—The Wildcats outshot Rochester Lourdes 42-17 as they cruised to a 7-2 win over the winless Eagles. Gavin Giesler (So., KM) and Brody Lamb (So., Byron) scored two goals apiece to pace the Wildcats offense. Isaac Rogne (Jr., Byron), Ethan Dale (Jr., Pine Island) and Jake Isaak (So., Byron) added goals. Giesler opened the scoring with a nice break-a-way backhander that found the back of the net. His second goal of the first period showed some touch in front of the net as he tipped in a shot from the point by James McPeak (So., Byron).

The Wildcats kept the pressure on throughout the first and second periods out-shooting the Eagles 33 to 10 and went into the locker room with a 5-1 lead after two periods of play. Isaac Dale made 15 saves on the evening to record his 8th win of the season.

January 12 is the Wildcats Stick it to Cancer game at Four Seasons Arena, a fundraiser for the Eagles Cancer Telethon. Amery, WI (10-4) comes to town for JV at 1 p.m. and Varsity at 3 p.m. All gate proceeds from the game will be donated to the cause. There also will be gift baskets for a silent auction, $5 luminaria bags for purchase, $12 for Stick it to Cancer t-shirts, and a Stuff the Stick with Cash activity. A brief program will take place prior to the start of the Varsity game. Join the Dodge County Boys Hockey family and let’s help find a cure for cancer. 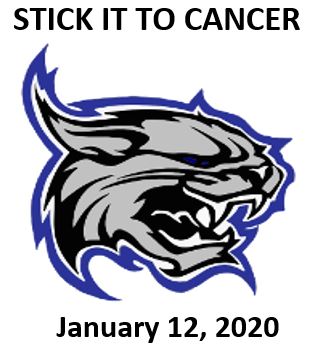 On January 12, prior to the Varsity game at 3 p.m. there will be activities to help support Dodge County Boys Hockey raise funds for the Eagles Cancer Telethon. All gate proceeds, gift basket silent auction proceeds, and Stuff the Stick proceeds will be donated to help find a cure for cancer. Purchase luminaria bags for $5 and join us for a service to remember those we have lost to cancer and honor those still fighting.