Kasson, MN—Dodge County (12-5) built a 6-2 lead after two periods and cruised to an 8-3 win over Tartan (8-9) on Tuesday night, January 21. Brody Lamb (So., Byron) deposited three goals into the net, the second goal left the Tartan defense wondering what happened after Lamb deked and dangled his way around several defenseman and the Tartan goalie.

Tartan took an early lead at 5:33 of the first period, but Lamb, Jake Isaak (So., Byron) and Isaac Rogne (Jr., Byron) provided a goal apiece in the first period to give Dodge County a 3-1 lead at the end of one.

The Wildcats kept the pressure on in the second period as Lamb scored at 4:52 assisted by Cade Sprieter (Sr., Kasson-Mantorville) and Lamb scored again less than a minute later assisted by Charlie Blaisdell (Jr., Kasson-Mantorville). After a Tartan goal at 12:52, Sprieter scored a power play goal after a nice cross-crease pass from Blaisdell less than a minute later to give the Wildcats a 6-2 lead after two periods.

Tartan turned up the pressure in the third period, outshooting the Wildcats 17-7, but goalie Isaac Dale (So., Pine Island) stood tall and held Tartan to just 3 goals on 35 shots for the game. Gavin Giesler (So., Kasson-Mantorville) and Isaak completed the scoring in the third period.

Section 1A foe Faribault (11-3-2) travels to Dodge County Ice Arena on Thursday night, January 23 at 7 p.m. This is a key match-up of two good teams and the outcome will affect section seeding for the tournament. It will be an interesting match-up as Faribault’s stingy defense has only allowed 1.81 goals per game versus the offense of Dodge County scoring 5.12 points per game. Faribault is coming off a big win against section 1A Mankato East. 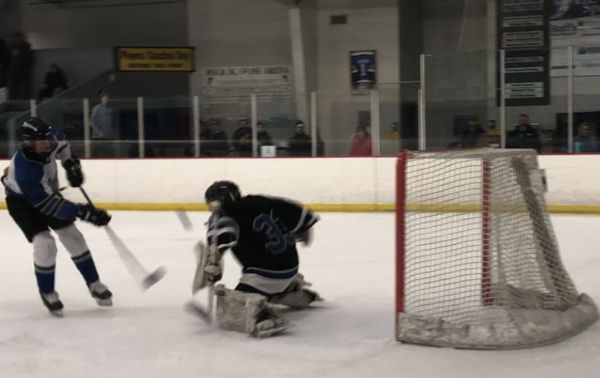 Tartan goalie, Kyle Kulevich makes a nice save on a Brody Lamb (So., Byron) scoring attempt in the first period of Tuesday night’s game. Lamb scored 3 goals with 2 assists against Tartan on Tuesday night, January 21.